The Promises Of God (Day Two)

Yesterday I wrote about the rainbows of God and today I would like to continue this theme. God in Genesis 6-8 flooded the Earth killing off the inhabitance. In Genesis 9 God created the first rainbow and placed it in the sky as a promise not just to Noah but also mankind that He will not flood the earth again.

This rainbow tells us a lot about the character of God; it tells every human on this planet in a very tangible way that God makes and keeps promises and that His character is trustworthy. Every time we see a rainbow in the sky we know that we can trust God to keep His promises. Promises not just regarding a flood, but promises regarding salvation, the power of the cross, healing and more. The rainbow lets you know that He will never let you down.

Throughout the Bible there is a track record of God keeping promises. All the promises regarding the coming of Jesus and His life were all fulfilled. The Old Testament itself is a record of promises to Patriarchs, Kings, Prophets, Israel and the world. All God’s promises in the Bible are stated in clear simple terminology. They were not ambiguous but held great clarity. They held great clarity so that we can look and see that God is a God who keeps His promises. In fact God watches over His word. Nowhere in scripture does God counteract or go back on His promises.

So therefore, we can know with full certainty and clarity that God keeps promises. The words and promises that God has personally spoken over your life and over your situation will be fulfilled. Even in those darkest moments when you feel like even God has abandoned you and taken back His promises; you can know in absolute certainty that He is true to His word and that He speaks promises into your life, to shape you to build you into the person you were created to be. He has good, fantastic things planed for your life; great promises and even if you can’t see them yet, the Bible shows us that He has a great track recorded for keeping His word.

Just look at the rainbow as real evidence for that.

This site uses Akismet to reduce spam. Learn how your comment data is processed. 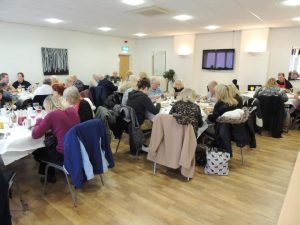 Every Wednesday from 1230 until 130pm Oasis and Personal Choice hosts a Lunch Club. The Lunch Club is open to anyone to attend and costs just £4.00 for two courses! It would be great to[...]
View Calendar
Add
This website uses cookies to improve your experience. We'll assume you're ok with this, but you can opt-out if you wish.Accept Reject Read More
Privacy & Cookies Policy

This website uses cookies to improve your experience while you navigate through the website. Out of these, the cookies that are categorized as necessary are stored on your browser as they are essential for the working of basic functionalities of the website. We also use third-party cookies that help us analyze and understand how you use this website. These cookies will be stored in your browser only with your consent. You also have the option to opt-out of these cookies. But opting out of some of these cookies may affect your browsing experience.
Necessary Always Enabled

Any cookies that may not be particularly necessary for the website to function and is used specifically to collect user personal data via analytics, ads, other embedded contents are termed as non-necessary cookies. It is mandatory to procure user consent prior to running these cookies on your website.